Here is a our Football Soccer themed Sudoku. Use the buttons below the Sudoku to create another, adjust the difficulty, view the solution or print as a worksheet.

Football, often called soccer is a sport played between eleven players where each team has to score a goal by getting the ball into the opposing goal. 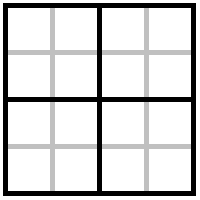 It's Soccer "goal" Sudoku - fill in the grid with the letters G, O, A and L, making sure no letter is repeated in every row, every column and within each mini grid.